During my last trip to Svalbard, I had the oportunity to test the Laowa 9mm f/2.8 Zero-D ultra-wide lens. Here is my experience with it.

Disclaimer: All photos were made with the Fujifilm X-T2 and I adjusted them as usual, including some sharpening, etc. By the way, I am definitely not a landscape photographer, so consider them rather as a document from the trip.

It is great that we can have ultra-wide rectilinear lenses for APS-C cameras like excellent 10-24 mm and 8-16 mm Fujinon zooms. But there is no ultra-wide prime lens currently in Fujifilm X lineup and this niche didn’t remain unoccupied.

Third party Chinese manufacturer Venus Optics usually tries to offer a special optics that do not have a direct competition (like their full-frame 15 mm 1:1 macro lens). The Laowa 9mm f/2.8 Zero-D APS-C lens is not as unique because some alternatives exist, but it still offers a mix of features that make it interesting.

The big benefit of this lens is its size and weight. It’s not a pancake lens, but it’s probably most subtle ultrawide lens I ever used – with 53 mm in diameter, 60 mm in length and 215 g weight it doesn’t need a lot of space in a bag and does not burden too much. Even the petal-shaped lens hood does not add too much to the length of the lens – it is not a surprise that it is very short for such focal length. The diameter of the filter thread is 49 mm – unfortunately, you don’t find this size on Fujinon lenses, so you cannot share the filters with other lenses (you can use an adapter rings, of course). 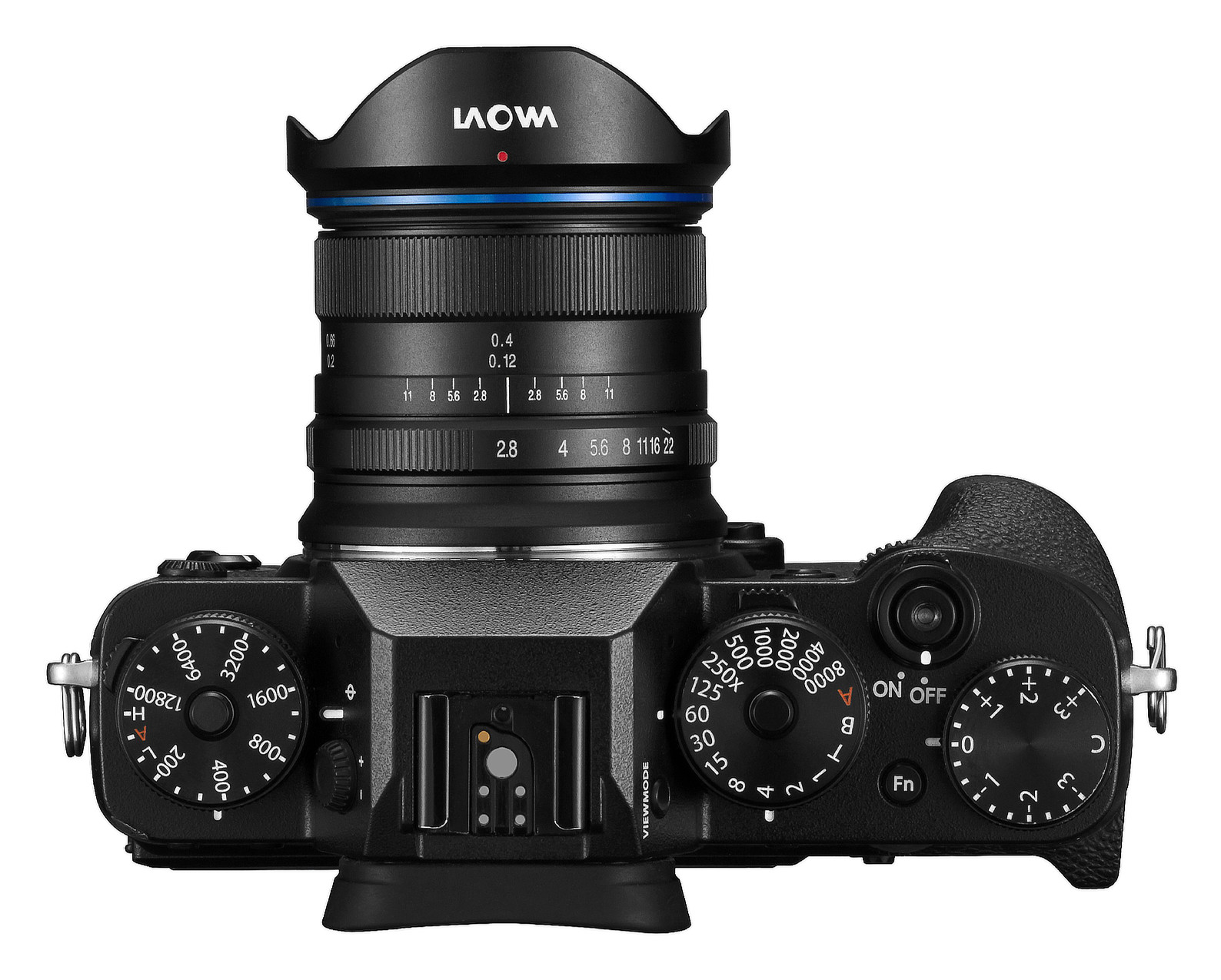 With 60mm length and 53mm in diameter, the Laowa 9mm is a really small lens.

By the way, the small size of the lens caused me a curious accident – it fell over a divider to the other compartment of my backpack with XF16mmF1.4 lens where it scratched its UV filter and own front flange. Of course, I do not blame Laowa – the problem was in my backpack which had interior adapted for carrying the XF200mmF2 which I was testing too and the smaller number of dividers couldn’t hold the shape of backpack well which allowed the lens to travel inside.

But I don’t want to complain about lens small size – contrarily I really appreciate it.

Since Laowa is a fully manual lens, controls consist of aperture and focusing rings only. If you are Fuji shooter, you may be a little bit confused by aperture ring which has reversed orientation compared to Fujinon lenses. 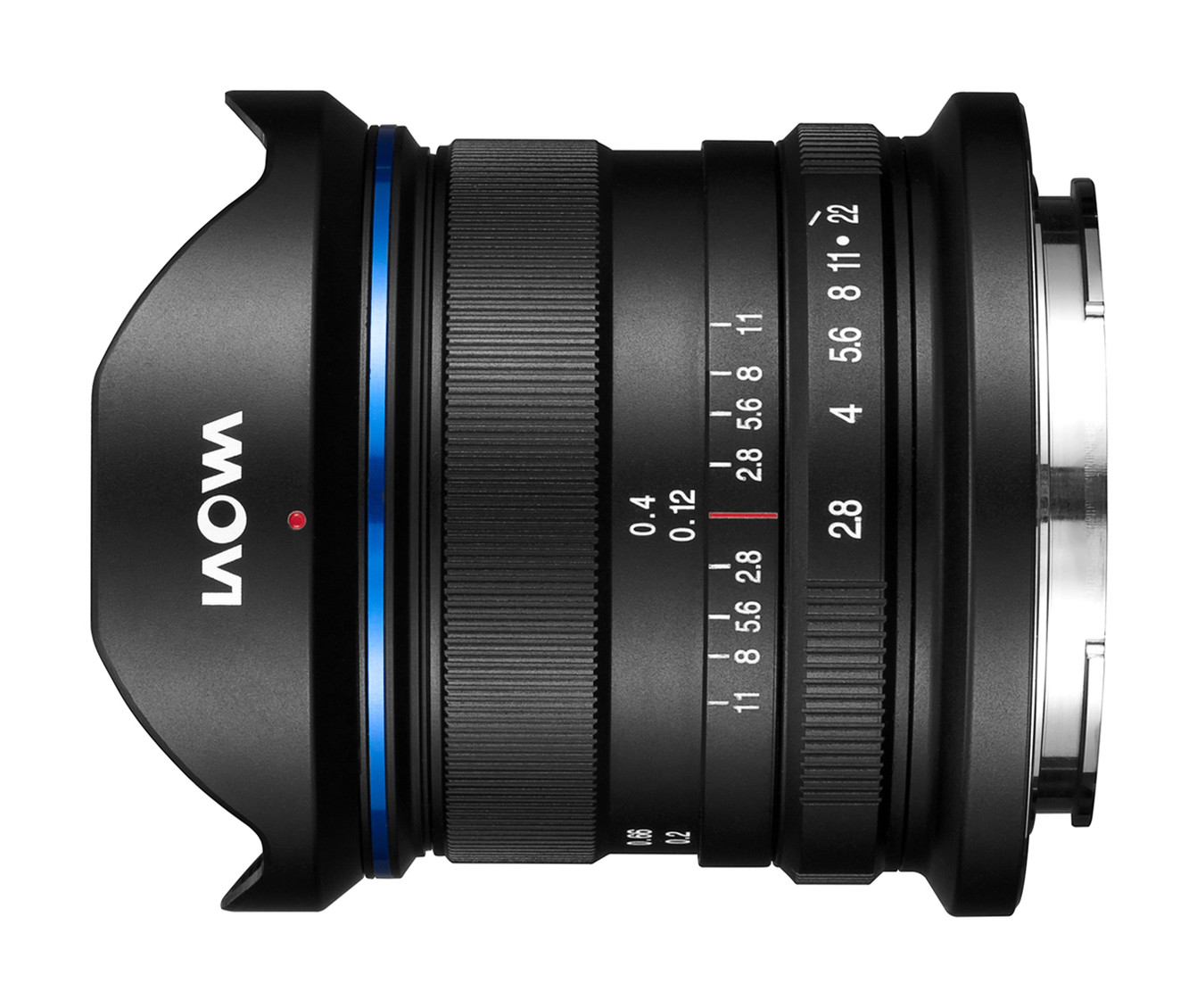 Focus ring behaves like these on Fujinons, so there should be no confusion. I appreciate the presence of a depth-of-field scale – by the way, it is worth to say that even such a wide-angle lens does not render everything perfectly sharp from zero distance to infinity. This is mainly due to the fact that depth of field scale (and calculators) typically shows an acceptable and not perfect sharpness. In many situations, f/8 aperture and focus set to about 1 meter will be sufficient, but you can still ruin the photo by incorrect focusing. It happened to me a few times – not because I was not able to focus correctly but because I forgot to focus at all (AF lens habit). It is quite easy to overlook bad focusing in the viewfinder without zooming an image, but you will stop forgetting after some time :)

The build quality of the lens is great. The lens body and event the hood is made of metal and everything fits perfectly. It is a significant improvement compared to the first Laowa lens I had in my hand a few years ago.

The main promise of the lens is to have minimal distortion, which is a big challenge when designing ultra wide-angle lenses. Engineers in Venus Optics did a really good job. There are not many straight lines in nature, so I made a test shot for this purpose in front of the FujiFoto shop: 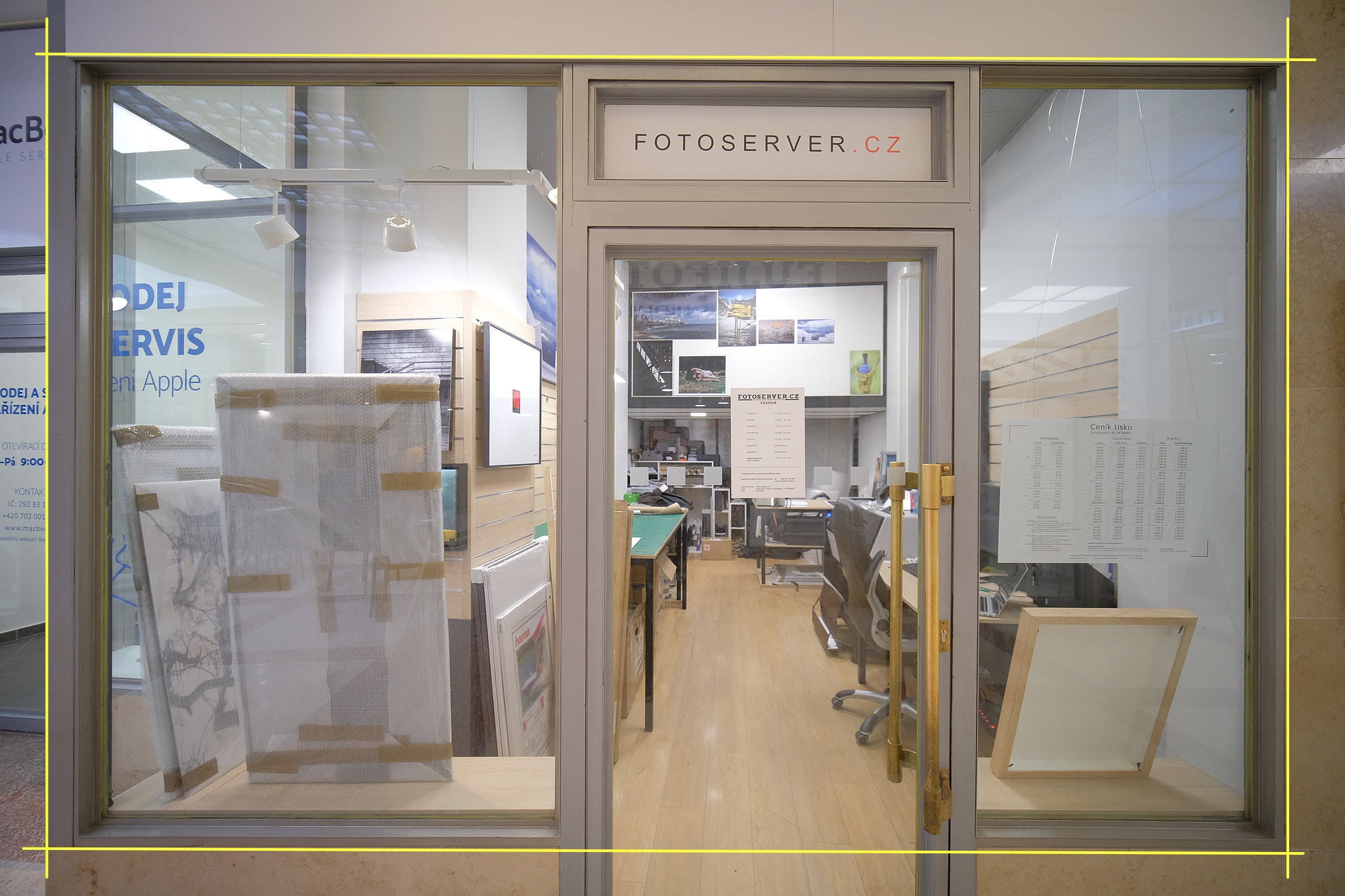 Although you can fix distortions quite easily in postproduction, it is definitely better if geometric corrections are not needed, as they always have some impact on the quality and may also lead to a slight change of composition or loss of parts of the image information around the edges and in corners.

However, it would be a mistake to expect that no other distortions will occur in the photos made with such a wide angle of view (113 °). Some objects may appear stretched at corners because of distinct perspective. It depends on the subject and composition – scenes with objects parallel to the plane of sensor like in the photo above won’t be affected, but in many other situations, you will see noticeable stretching. The following photo quite clearly shows what I am talking about: 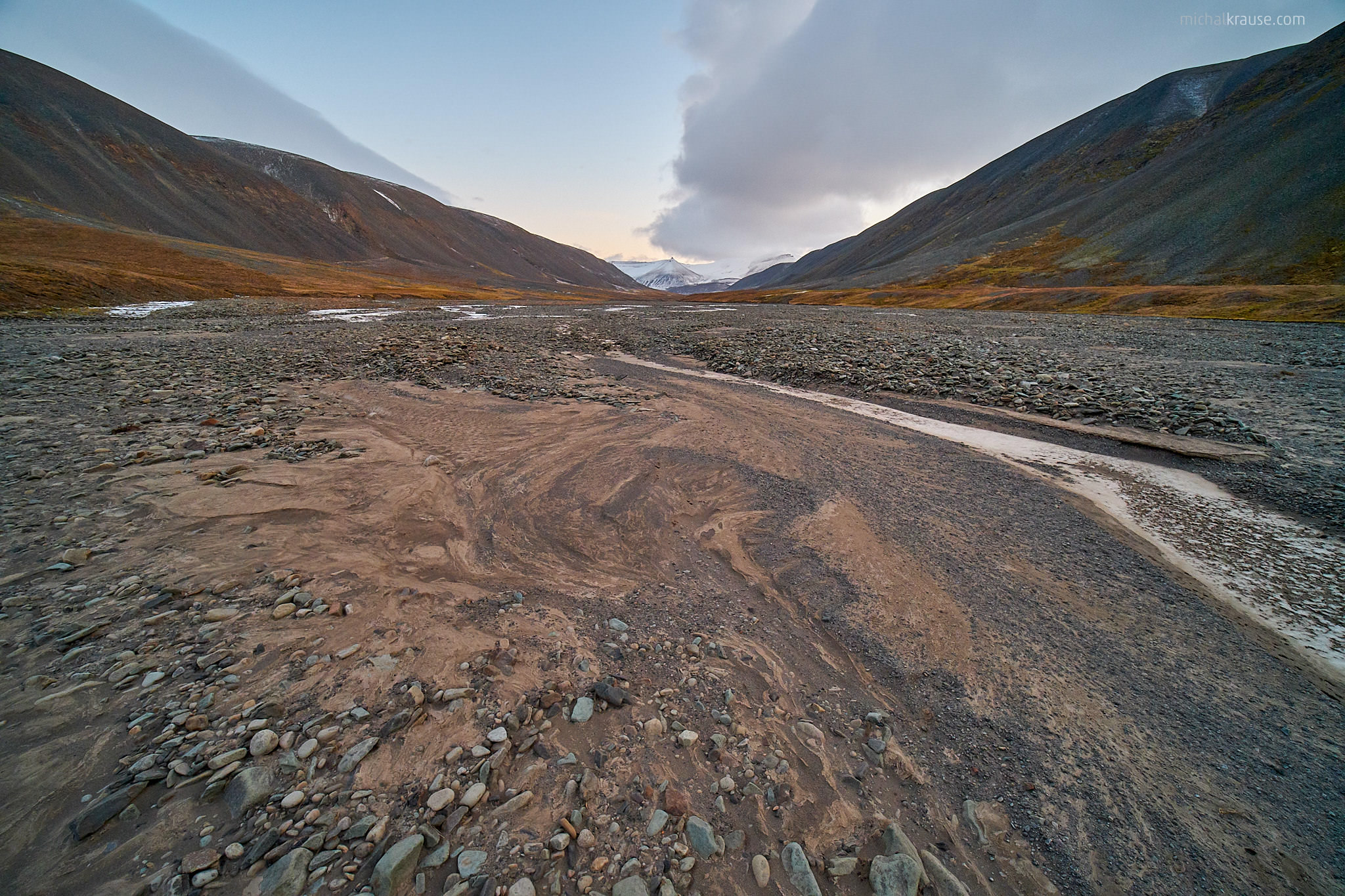 An example of a distortion in the corners – notice the stretched stones at the bottom left.

It is typical for such wide lenses (not only for Laowa) and you should consider it at the moment of shooting and choosing the composition. If this effect appears in the photo and bothers you, it can be partially suppressed by forced correction of pincushion distortion (and thus, paradoxically by artificially introducing barrel distortion). But it is, in any case, the choice between two evils – stretching the edges or bulging the center of the photo. 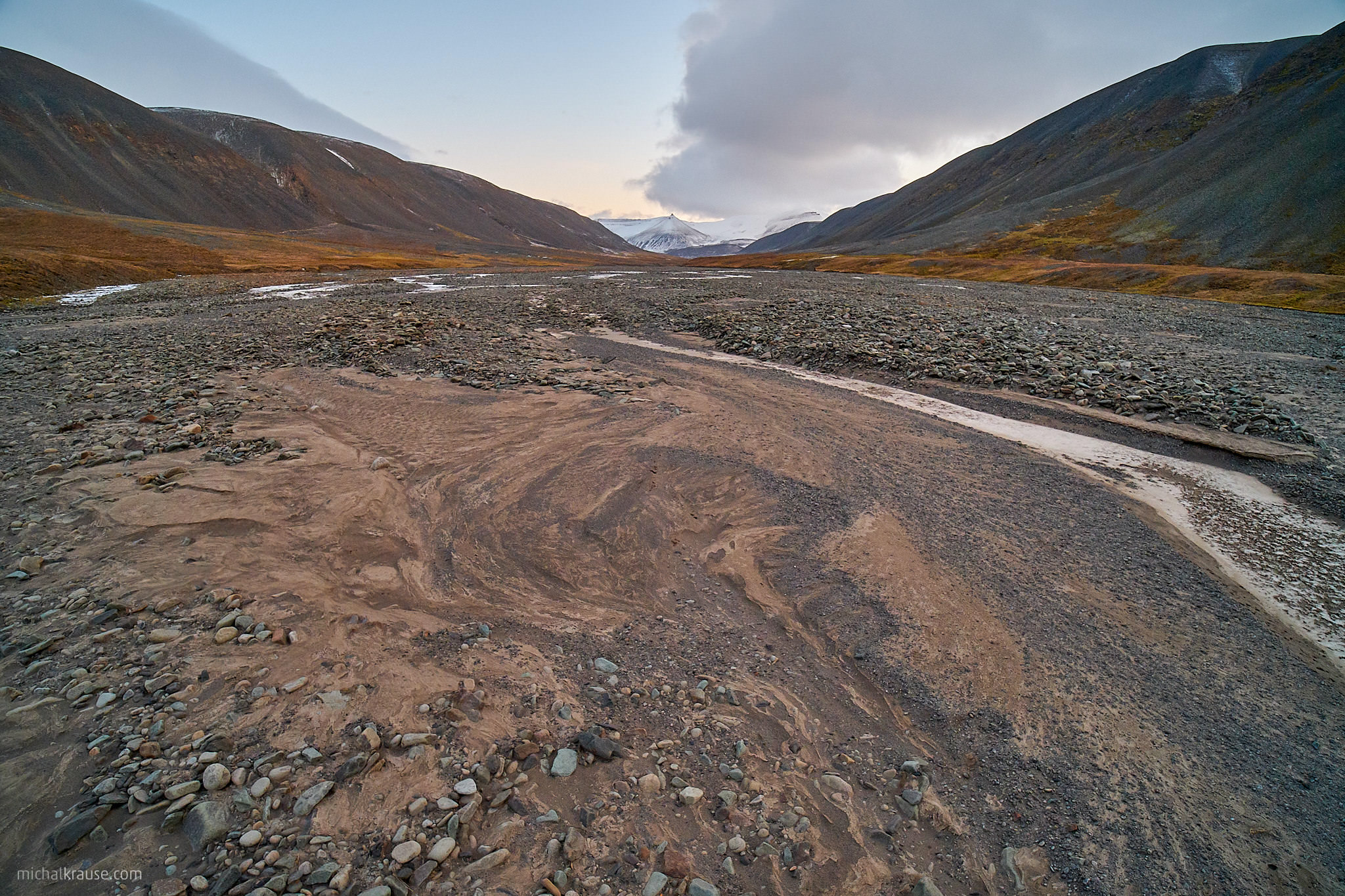 The same photo with bulged center – it is up to you, which one do you like better.

Laowa is a really solid performer for the wide-angle lens. I don’t test lenses using some patterns, I prefer to take it outside. 100% crops from the following image show that the lens is quite sharp even near edges of a frame: 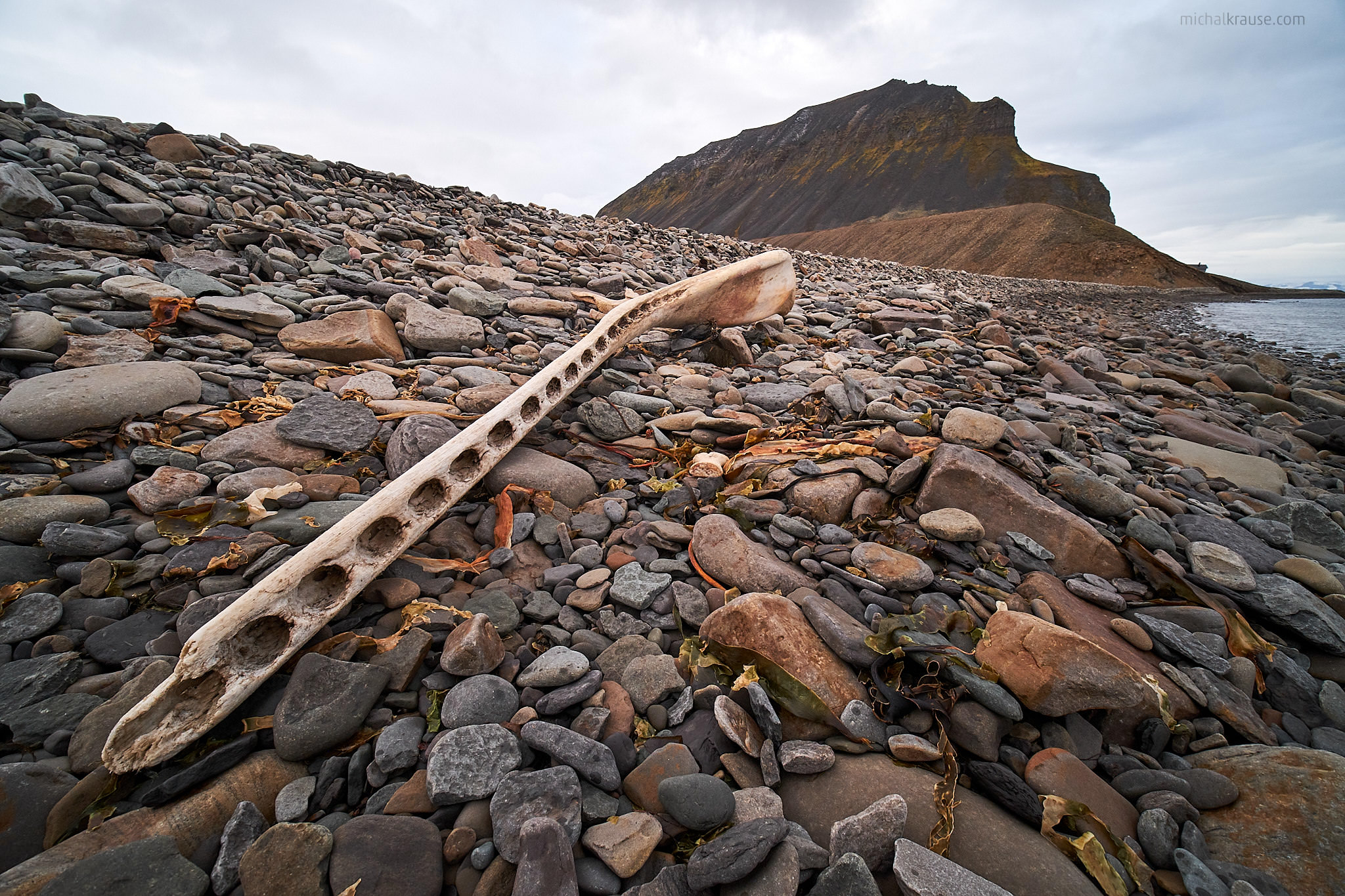 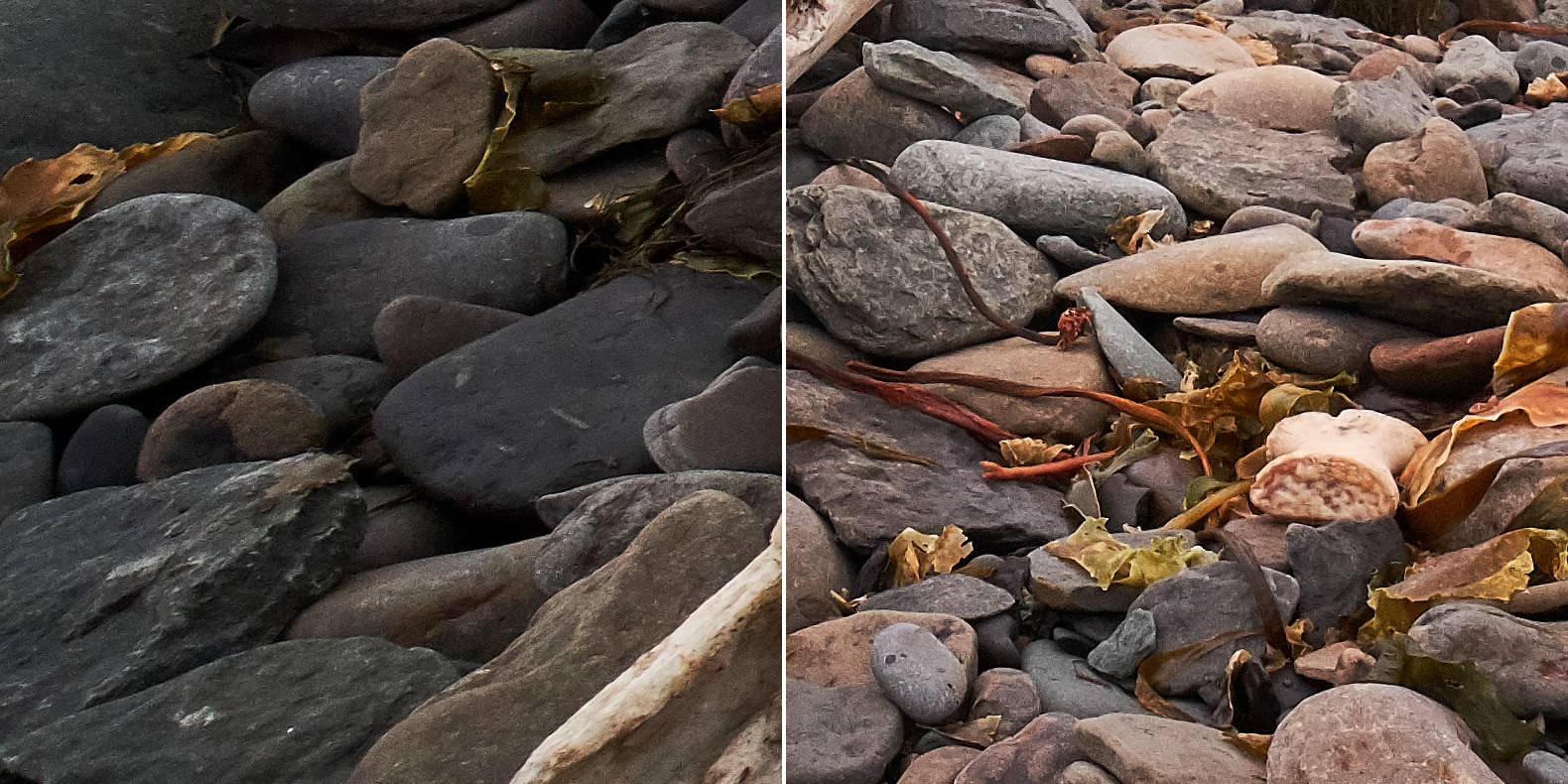 100% crops (left one is from the edge, right one from the center)

However, the lens needs to be stopped down for optimal results – edges of a photo can be noticeably worse when shooting wide open: 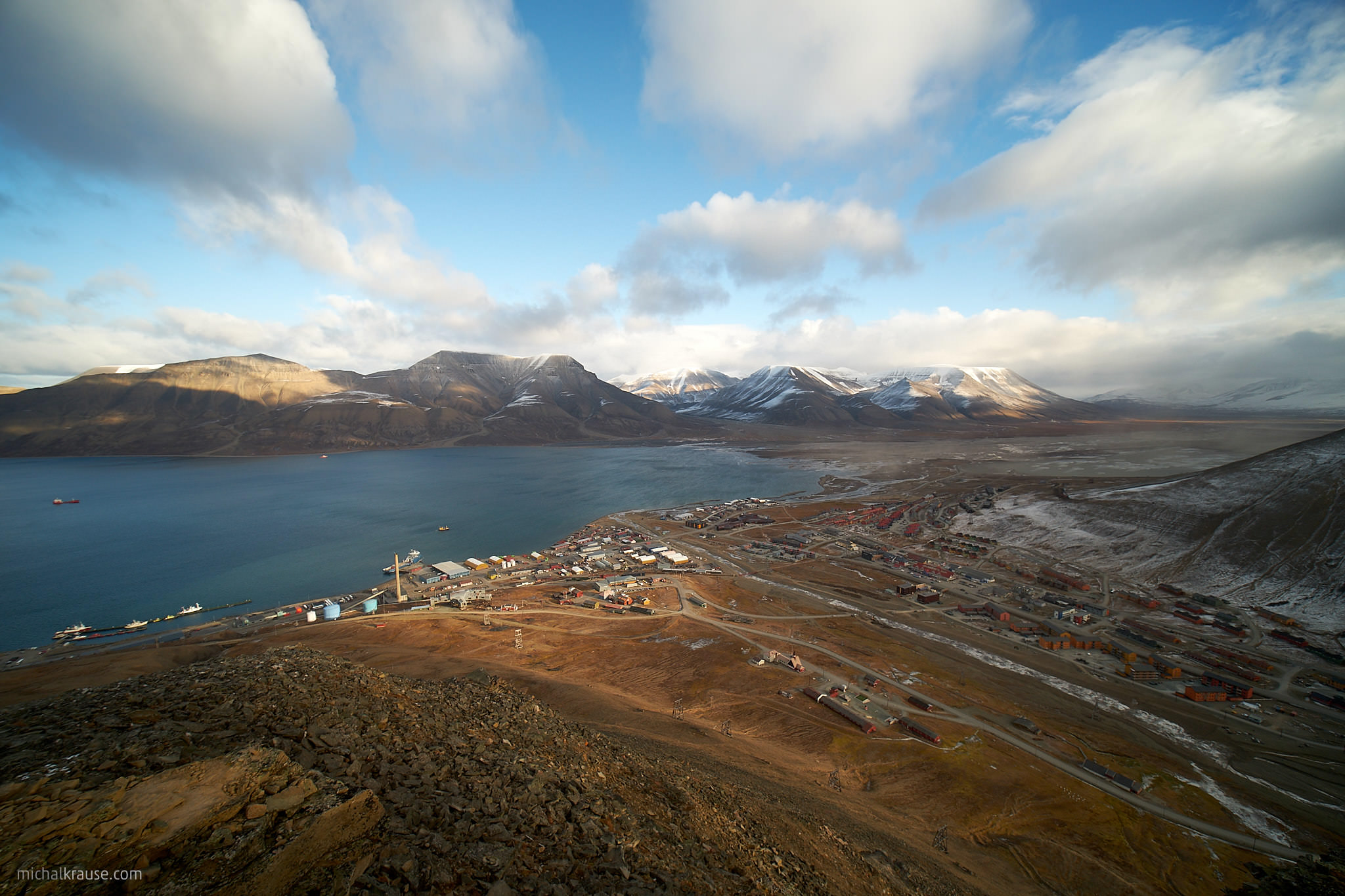 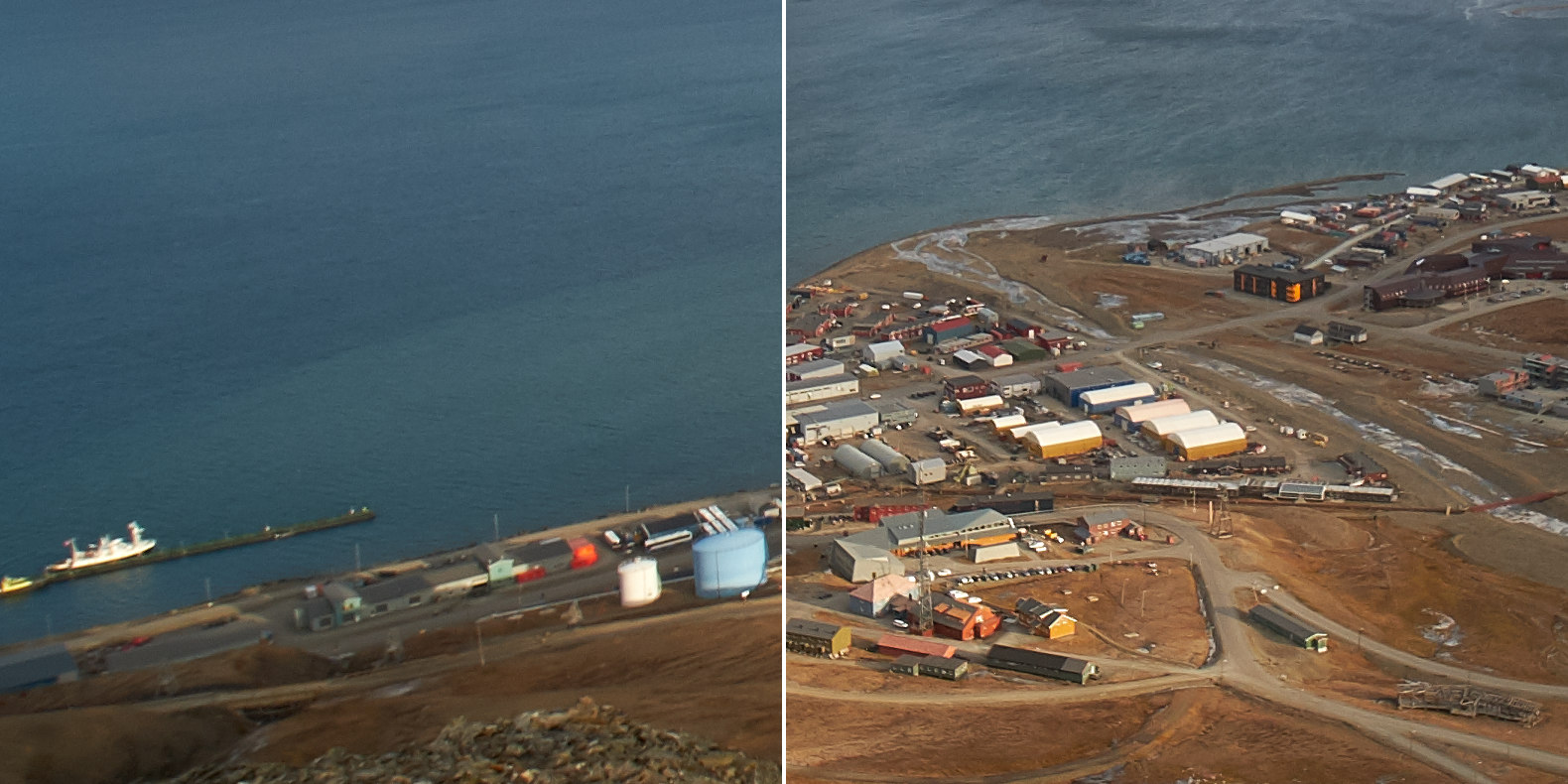 100% crops (left one is from the edge, right one from the center)

Vignetting is quite strong – probably as a result of lens compactness. When shooting wide open, the difference between center and corners reaches almost 1 EV (according to the correction I had to apply in Capture One). This problem gradually disappears when shooting at larger aperture numbers. 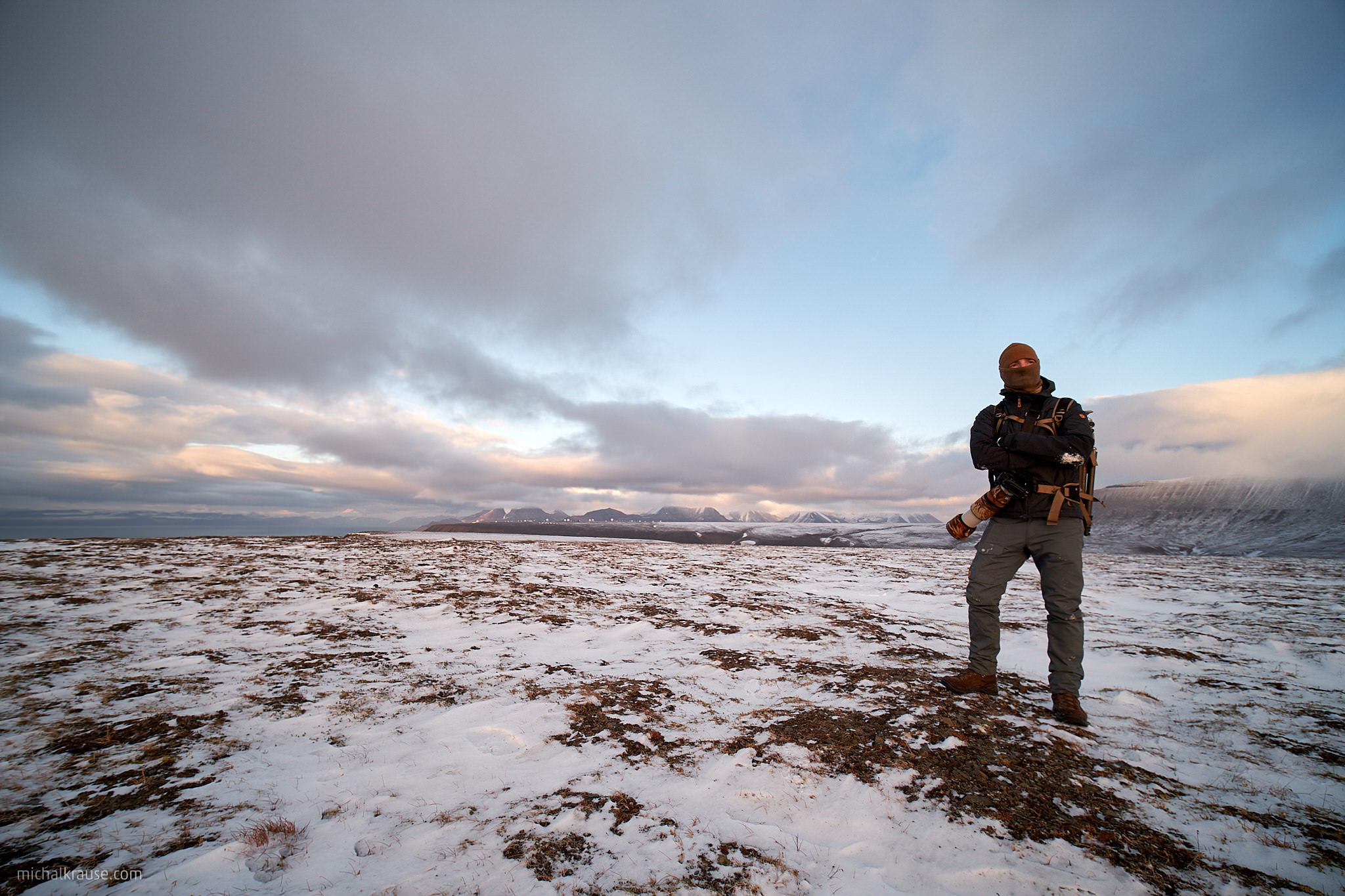 Vignetting example – my friend Jakub is waiting while I end testing Laowa :) 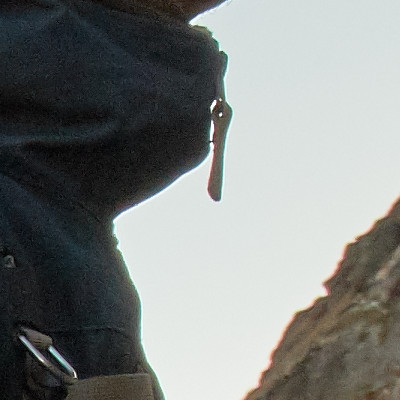 Chromatic aberration sample – dark jacket against the light sky. CA is thin and it was not easy to find an image where is visible.

I have a bit ambivalent feelings about lens behavior in backlight. While the contrast does not suffer much, you can see strong reflections from the sun in the following image: 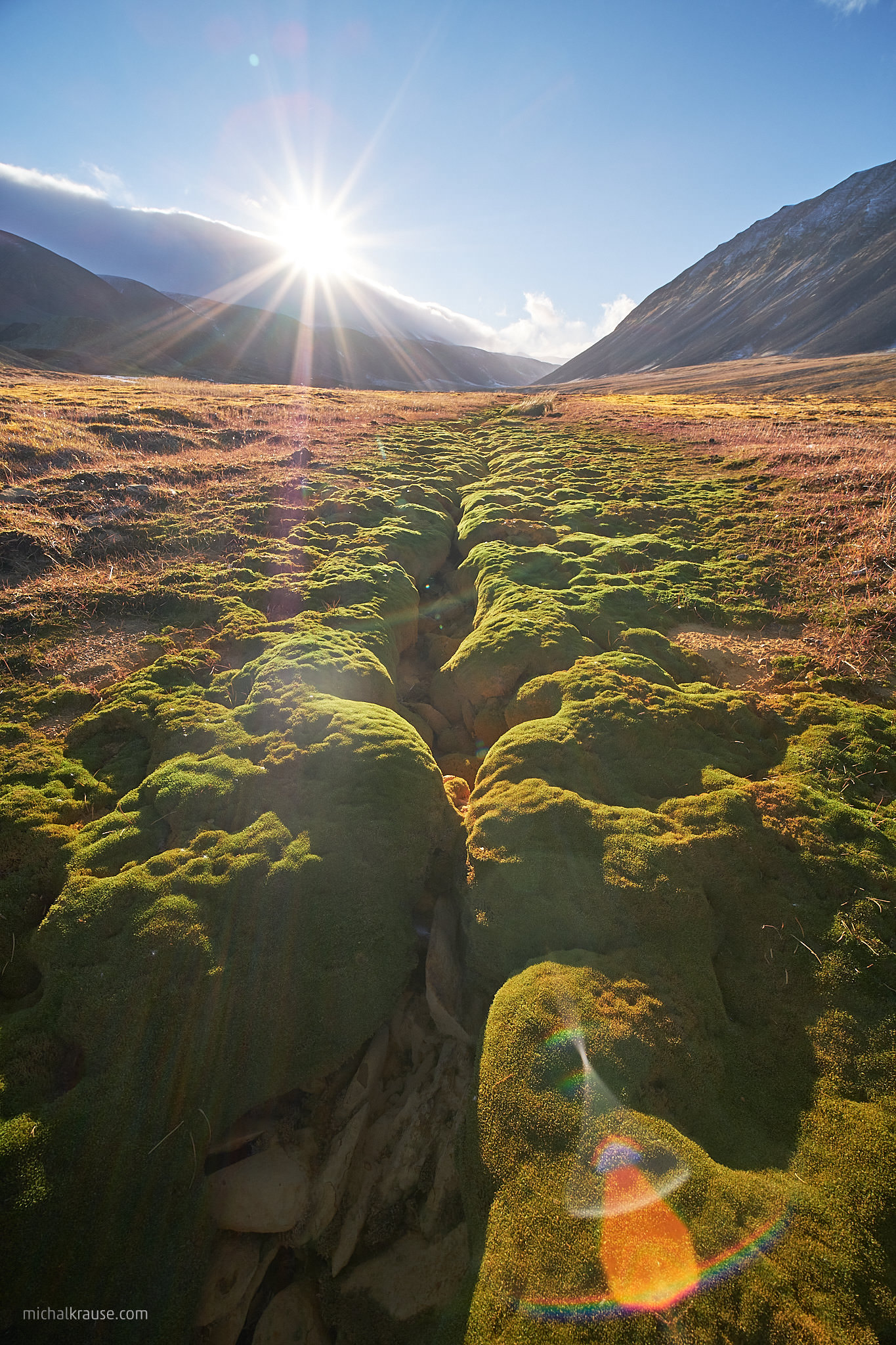 Reflections when pointing lens to the sun – there are a bunch of them, you can see the arc in the center of the image, then there is series of smaller reflections, larger circular spot, and distinct white and orange shapes.

Of course, this is the extreme situation with the sun composed into the image, but I think it is good to see even this worst-case scenario. There were no issues caused by a more subtle backlight from the sun setting in the clouds: 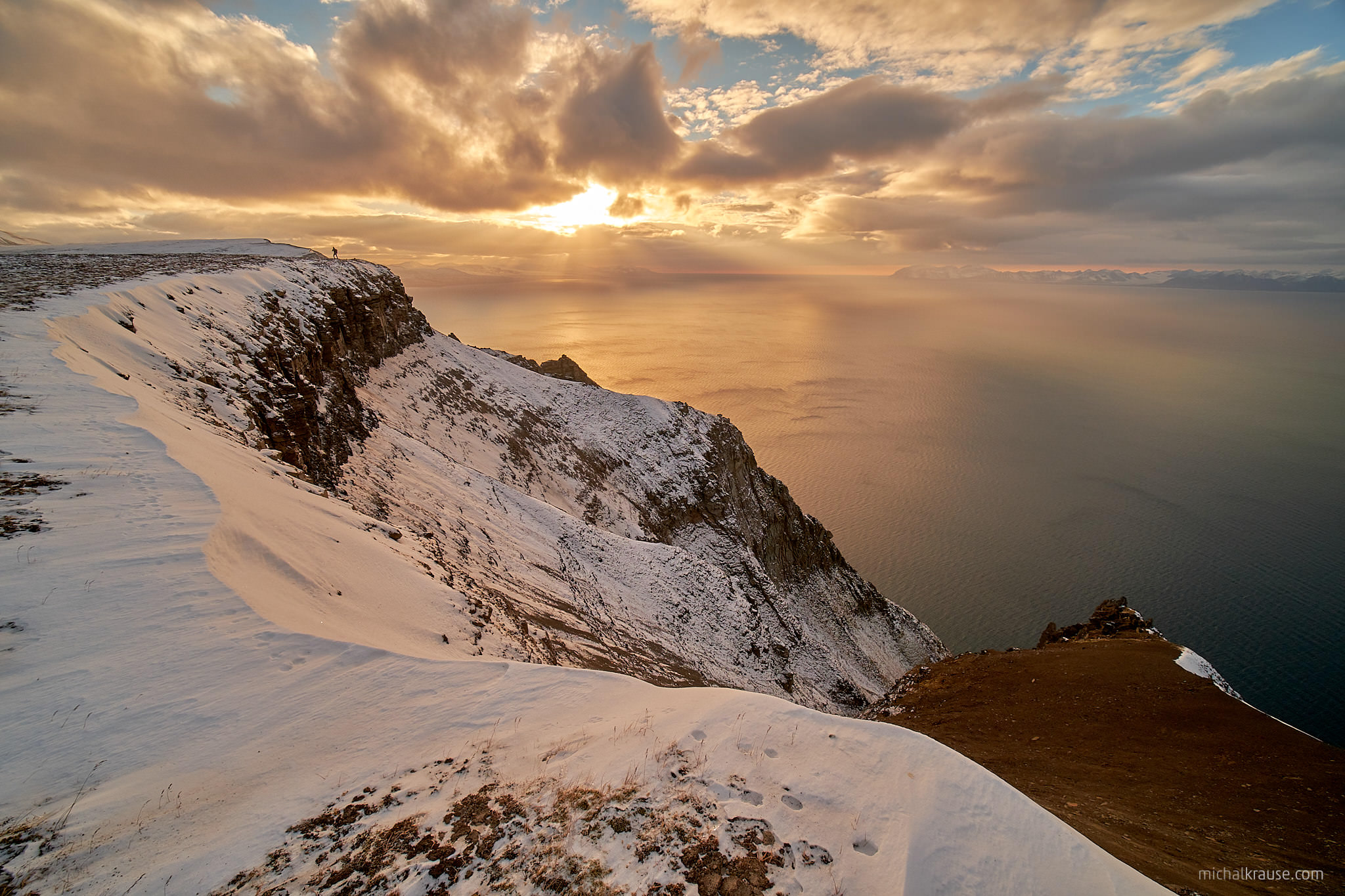 If you use Laowa or another manual lens, make sure you set its focal length in the camera’s settings – it will be saved in the EXIF photo. You can store more lenses, but then you have to choose the right one manually from the menu each time you change lens: 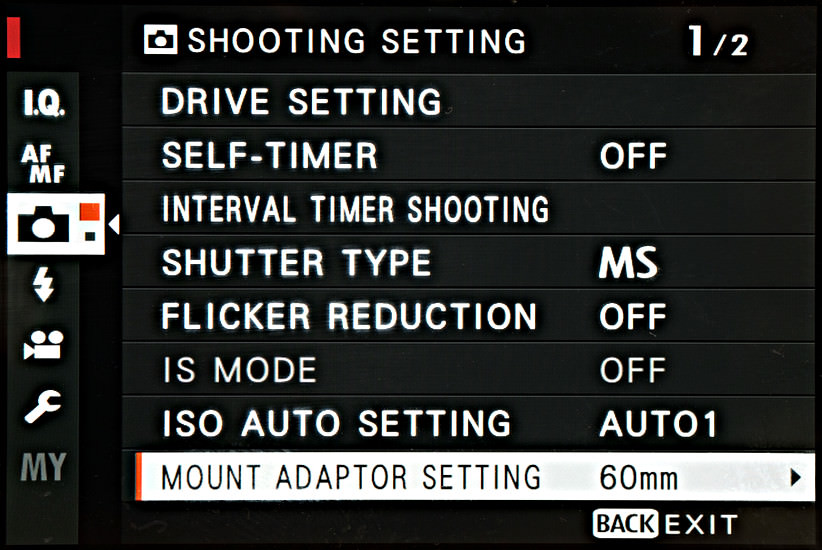 Focal length settings for manual lenses – it can be on the second page in some cameras.

As I already said, there are alternatives to the Laowa 9mm f/2.8 Zero-D lens, but the mix of its features – especially focal length, small size, lens speed, ability to focus to just 12 cm and fairly low price – makes it unique and basically has no direct competition now.

Regarding similar focal lengths, I have used Fujinon XF10-24mmF4 only and I like it’s output a bit more, but I did not test these two lenses in the same situation. Its f/4 aperture is limiting for the night sky photography, but otherwise, I can recommend it. The latest addition to the Fujinon lens line, the XF8-16mmF2.8 zoom lens can compete with Laowa’s speed and it is even 1mm millimeter wider (it is more than it looks – its field of view is 8° wider). However, both zooms are more expensive and they are bigger and heavier.

If you are looking for an ultra wide-angle glass that does not add too much volume and weight to your gear and you don’t mind to stop the lens down for optimal qualities, you will get very solid quality for your money. Of course, you also have to accustom to full manual controls and the fact that the lens does not communicate with the body, so EXIF data won’t contain the aperture used for example. You can buy Laowa 9mm f/2.8 Zero-D here for example.

You can support my work by buying your gear using the links in this article. Thank you! 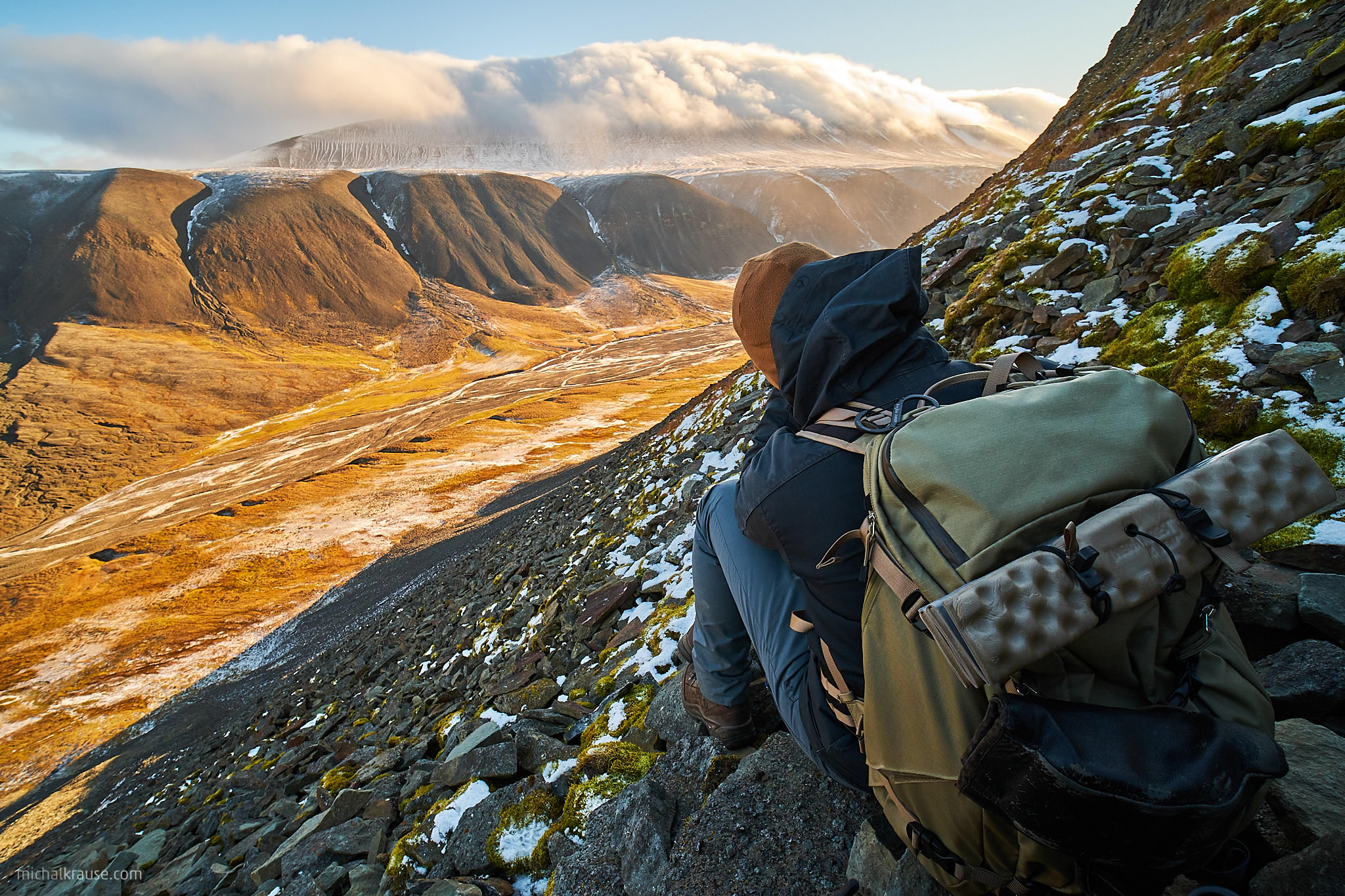 Rest during the descent from the plateau 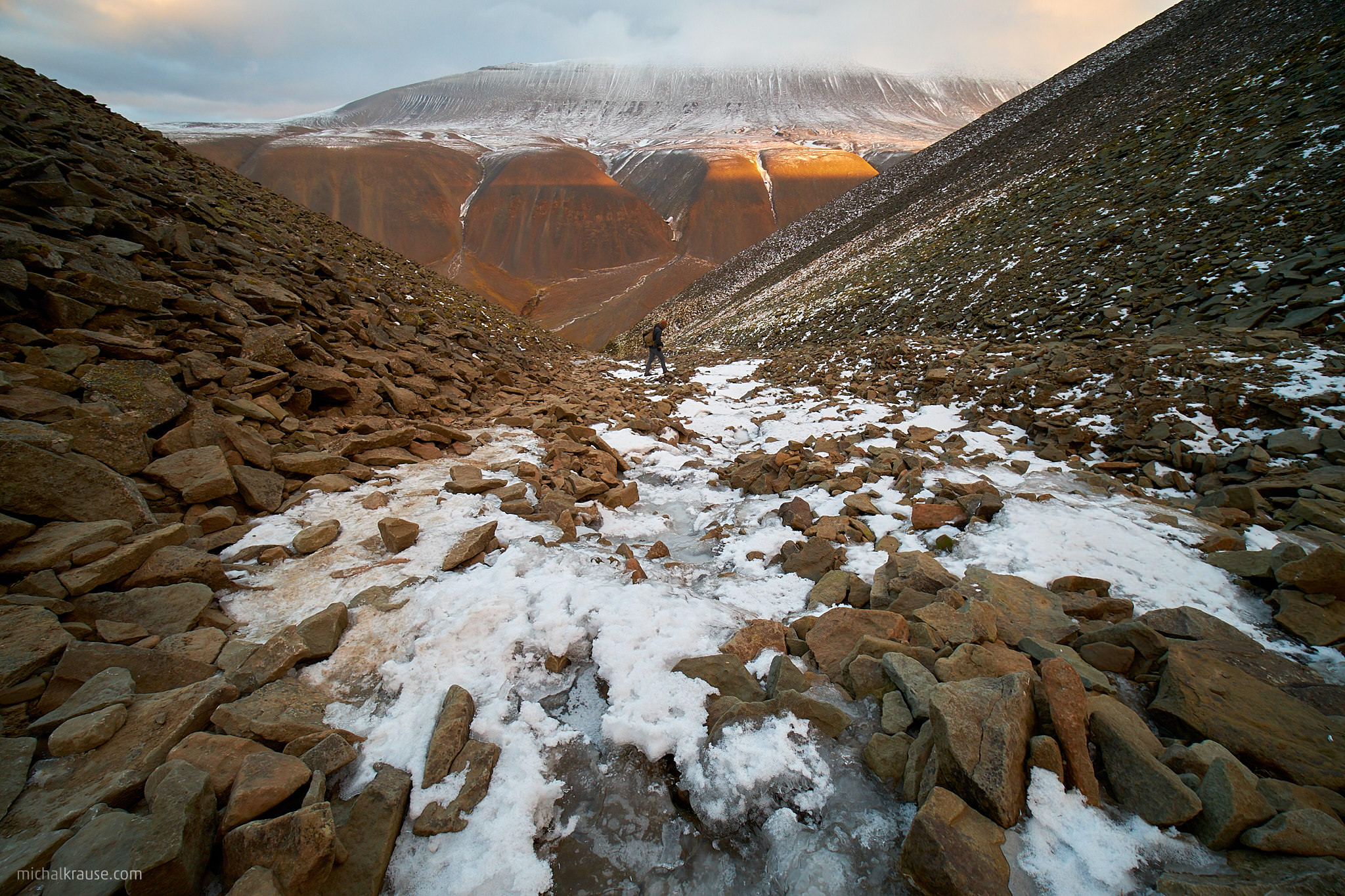 Descending from the plateau 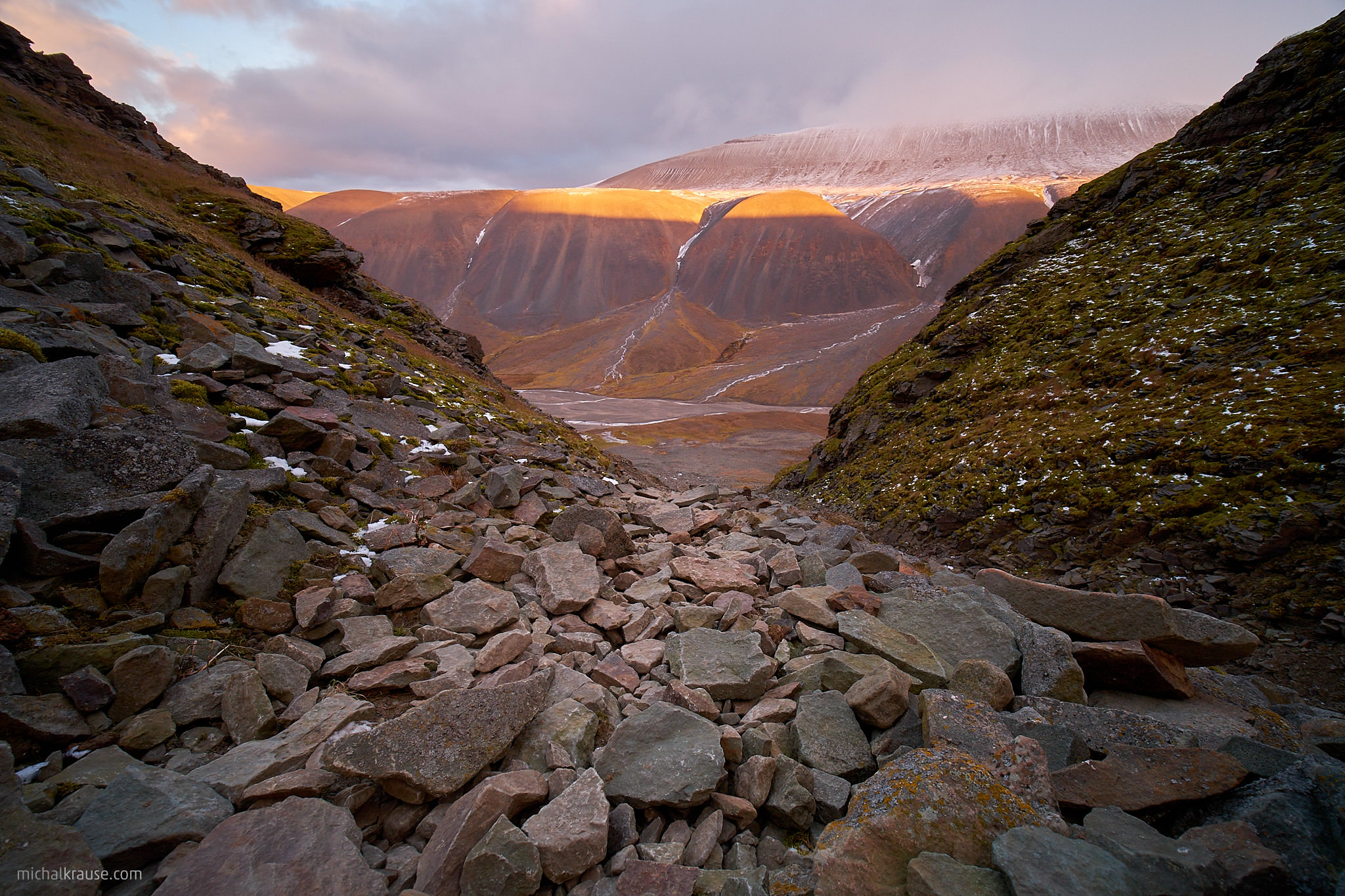 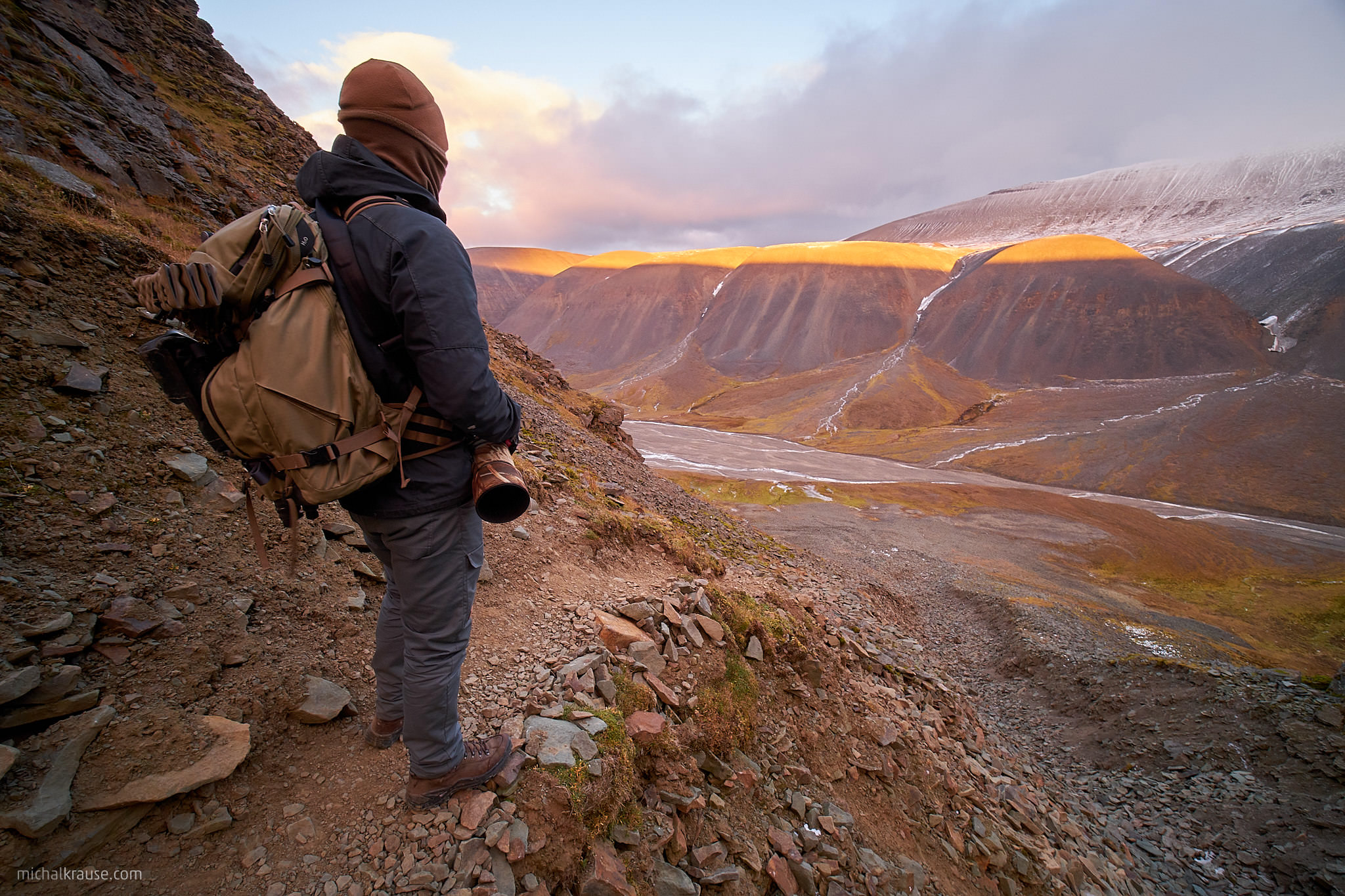 Extreme focal length needs you to be careful when composing – everything which is close to the lens and at image edges is stretched. Hopefully, Jakub will forgive me, that I turn him into a conehead with short legs. 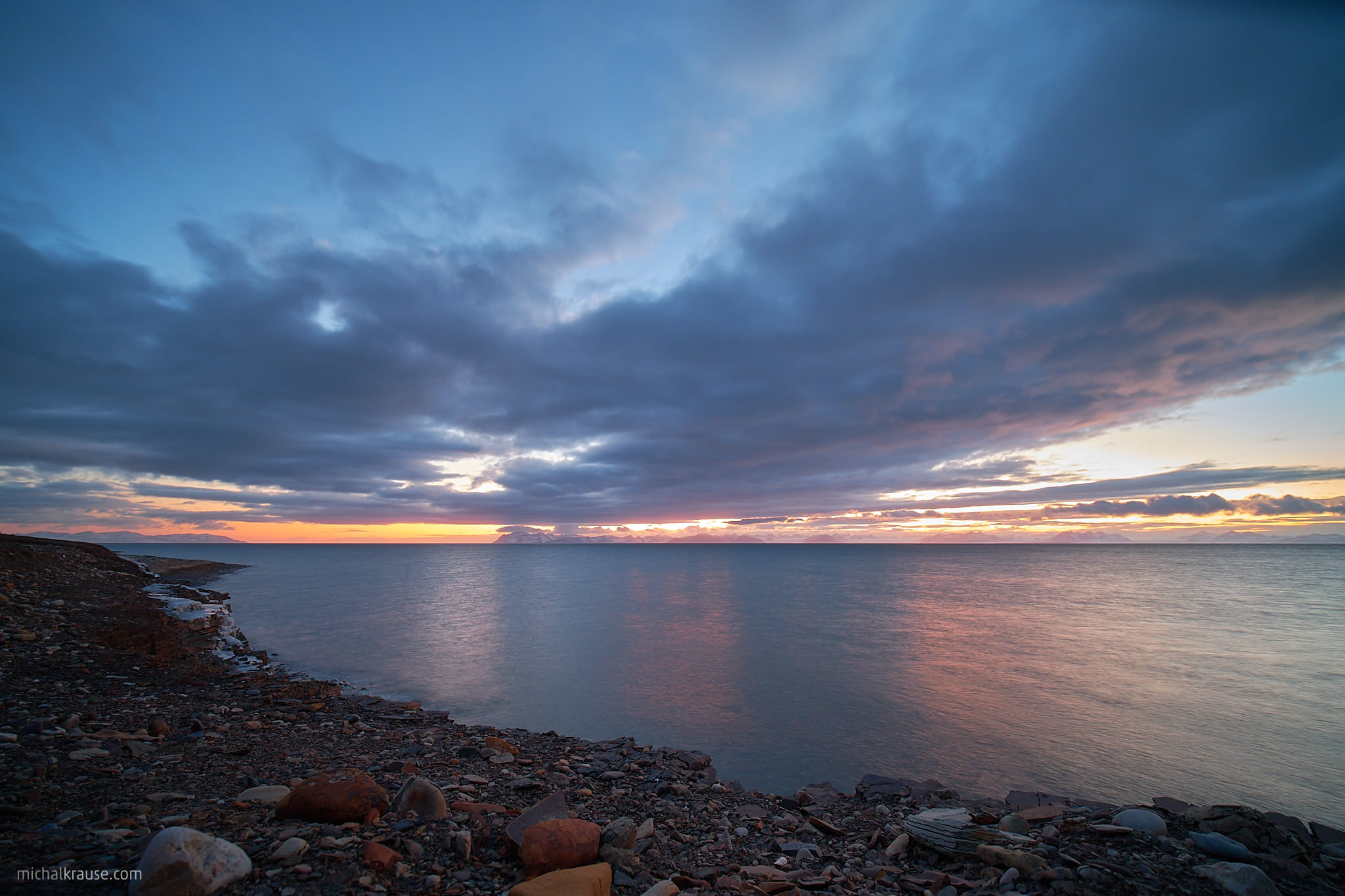 With a 9 mm focal length, you can easily capture a lot of skies. 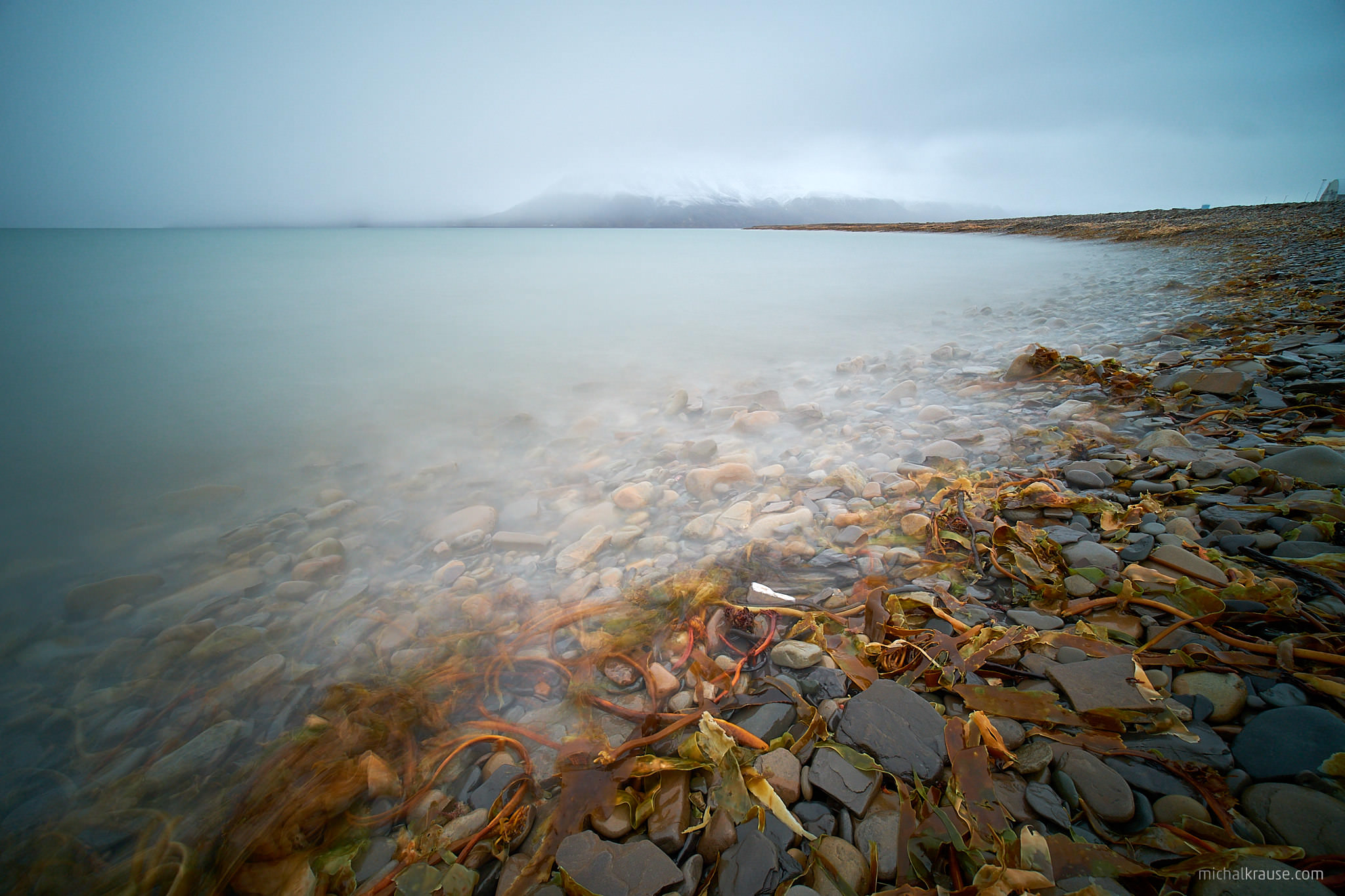 The ND filter I used for this photo was previously supplied with the lens. It is not a true anymore, but it is not a big shame – as you can see, the filter is not color neutral (there is around 1000 K difference between the center of an image and its edges) and increased vignetting a lot.